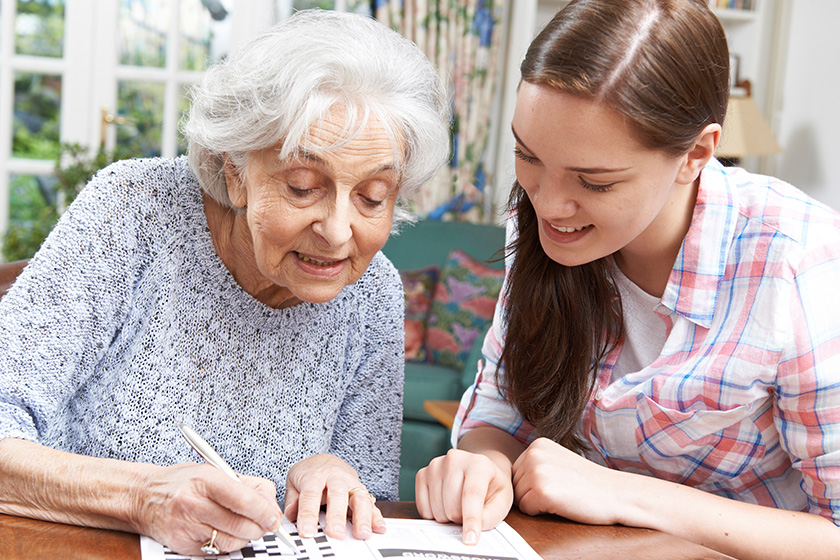 It has been said that it is a terrible thing to waste one’s mind, and this certainly becomes true as you get older. While many retirees are aware of the importance of exercising the body, the mind is equally important. One of the leading causes of conditions such as Alzheimer’s disease and dementia is a failure to stimulate the mind. The following brain exercises will help you to keep your mind sharp.

Many people who are sixty-five years of age and older feel that they have everything figured out, that they’ve experienced all that life has to offer; but they haven’t. Even the wisest and most successful elders aren’t all-knowing and the wisest of all recognize the importance of continued education even after they’ve left the workforce and joined an assisted living community. Learning to play a musical instrument or speak a foreign language is much better than sitting around playing bingo or watching television all day, and will force your mind to challenge itself.

Play Computer and Board Games

Many aging retirees associate computer or video games with children, adolescents, and young adults and want nothing to do with them; this is a mistake. Computer games are vastly superior to the traditional activities enjoyed by elders such as watching television or movies since they force you to use your mind and hand-eye coordination to solve complex problems and strategize. In fact, all video games, whether they are racing games, fighting games, action adventures or puzzles require the player to overcome various obstacles to achieve victory.

Traditional board games such as Chess, Monopoly, Checkers, Scrabble and GO are just as good and are palatable to most people in the 65+ age group since they don’t have the stigma which is associated with video or computer games. However, the difference between board and video games is that many board games must be enjoyed with a group and aren’t very fun for retirees who live alone.

Non-impact sports such as tennis, golf, bicycling, and swimming provide numerous advantages. First, they require you to use hand-eye coordination and get off the couch. Second, they require you to think strategically so that you can find ways to outwit your opponents. As such, these activities are great for the mind and body and will keep you feeling young.

One of the best ways to expand your mind is by attending an event you’ve never been to before or traveling to a location that is unfamiliar and exotic. Going to such places with a group or socializing with the locals during your stay is one of the best ways to reduce your risk of developing Alzheimer’s disease and dementia. The reason for this is because travel and socialization activates multiple regions within the brain and are beneficial to them. It can be tough for those who are introverted by nature to interact with others and leave their comfort zone, but the benefits of doing so make it worthwhile.

Top 5 Hobbies You Should Try As An Active Senior Man
February 24, 2022

The Top 4 Senior Living Amenities Your Loved One Will Enjoy In Portage, IN
February 20, 2022

The Differences Between Normal Forgetfulness And Dementia
February 16, 2022

The Benefits Of Walking For Your Elderly Parents
February 12, 2022

Reasons Why Reading Is Very Beneficial For Someone Your Age
February 8, 2022
Our Senior Living Community
Go to Top
Reveal Pricing
Schedule a Tour
Contact Us